The monthly schedule is church-like, with its parenting classes, guest speakers and small group meetings to hash out shared beliefs. But God isn't part of this Cambridge congregation.

Greg Epstein, the humanist chaplain at Harvard University, is building a God-free model of community that he hopes helps humanists increase in numbers and influence across the United States.

SURVEY: Most religious groups in USA have lost ground in 20 years

Epstein sees potential in research showing that there are a growing number of people in the United States with no religion. In the latest American Religious Identification Survey, released this month, 15% of respondents in 2008 said they had no religion, compared to 8.2% in 1990. Epstein believes that group includes large numbers of people who are humanist, but have never identified themselves that way and can be reached.

At the same time, there is broader acceptance of those with no faith, as indicated by President Barack Obama's mention of "nonbelievers" in his inaugural address, Epstein said.

Definitions of humanism vary. Generally, humanists reject belief in the supernatural and are guided by reason, experience and compassion for others. Epstein defines the philosophy as a commitment to living ethical, personally fulfilling lives while serving the greater good.

Epstein wants to create local humanist centers nationwide that perform many of the community-building functions of a church, only in service of the humanist creed. He will promote his idea as he tours the country to promote his book, "Good Without God," which is scheduled to be published by HarperCollins in the U.S. later this year. Epstein will receive assistance and funding from groups such as the American Humanist Association and the Secular Student Alliance, which have chapters they hope to strengthen and multiply.

"There are so many millions of people out there who basically share our views, that we've got room for everybody," Epstein said. "What we're doing here has got to grow even more."

Raised as a Reform Jew, Epstein studied Taoism and Buddhism before he became a humanist. He earned a master's degree in Judaic studies from the University of Michigan and a master's of theological studies from Harvard Divinity School. In 2005, he was ordained as a rabbi by the International Institute for Secular Humanistic Judaism. The movement says it combines reason, human experience, Jewish culture and ethical insights from Jewish tradition.

While many humanists reject anything that hints at organized religion, Epstein is freely borrowing from it — from the "small group" format familiar in evangelical churches to calling his group a "congregation."

Paul Kurtz, founder of the Council for Secular Humanism, disagrees with that approach, saying humanists are building secular communities that show people don't need religion to get together "in a joyful mood and do good works." But that's undermined when religious words are used to describe those communities.

"I don't think we should use the language of religion, that's very confusing," Kurtz said.

Though he supports Epstein, Fred Edwords of the American Humanist Association questions whether a large, untapped pool of potential humanists exists who would join congregations.

"This is a new mission field, if you will, but are those vineyards ripe for the picking?" Edwords said. "I haven't seen sufficient evidence of it."

Still, both men agree that more humanist communities are needed, for mutual support and to offset isolation humanists often feel.

Jenni Acosta, a humanist from Newton, Massachusetts, who is part of the Harvard humanist parenting group, said the group gives her needed support, and shows her 6-year-old and 10-year-old daughters that other children are being raised the same way. Acosta, 36, said she deals with family and friends who challenge her on how she can raise her kids without the moral guidance a faith provides.

"I think it's reassuring to all of us to know that we're there for each other and there's other examples of people doing it and their kids seem to be turning out OK," Acosta said.

Richard Lints, a professor of philosophical theology at Gordon-Conwell Theological Seminary, a prominent evangelical school in Hamilton, Massachusetts, said the humanist desire for greater community is understandable. He believes God "hard-wired" humans to need it.

But he said he doubts humanism can sustain itself in the local congregations Epstein envisions because community is not a natural part of humanism, where the individual is the ultimate source of meaning. If humanism becomes concerned with the "greater good," and a sort of natural moral order that implies, it starts to resemble religion and humanists will back away, he said.

"At the heart of the humanist project is deep individualism," Lints said. "It's always going to be difficult to sustain a real robust community."

To those who say it can't be done, Epstein points to his community at Harvard, and nonstop requests for more services, as a rebuttal. He believes humanists are responsible to make sure their community grows more.

"Salvation is here on earth," he said. "We have evolved over 14 billion years without purpose. Now we want purpose, we need to build it into our own lives."
Posted by CDM at 7:02 PM No comments: 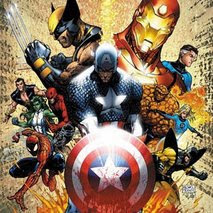 Thor is going to be thundering into movie theaters a little later than expected. Ditto some of his franchise-worthy crimefighting buddies.

Marvel Entertainment has pushed back the release dates of comic-book bonanzas Thor, The Avengers and The First Avenger: Captain America, delaying the films by up to a year.

As for why...well, it's all about building the buzz.

While the hammer-wielding Norseman was originally scheduled for release on July 16, 2010, he will now roar into theaters the following summer, on June 17, 2011.

The Avengers, meanwhile, is even further from fruition, nixing its planned July 15, 2011, release (and a showdown with the final Harry Potter) for one on May 4, 2012, instead.

Captain America fans have the shortest wait time, with the film's release getting a comparably measly delay of just a few months. The First Avenger is moving from a release date of May 6, 2011, to one of July 22 the same year.

No reason was given for the schedule shift, though Marvel Studios chairman David Maisel said that the switcheroo "maximizes the visibility of our single character-focused films, leading to the highly anticipated release of the multicharacter The Avengers film in 2012."

Spreading out the releases also gives the studio the shot of at least one of the films turning into a blockbuster and lessens—though far from alleviates altogether—the chances of direct competition with other Marvel releases.

And, of course, it builds buzz and recognition for the hopefully all-star characters set to appear in the superhero conglomerate The Avengers.

As it now stands, Iron Man 2 will be the sole Marvel release for 2010, while Spider-Man 4, Thor and The First Avenger: Captain America will hit screens in 2011. The Avengers will come later still in 2012.

Castmembers are already being rounded up to participate in the effects-heavy crowd-pleasing slate. As announced yesterday, Mickey Rourke and Scarlett Johansson have both formally signed on to appear opposite Robert Downey Jr. in the highly anticipated Iron Man sequel.

That film's release date remains unchanged and is still on track for a May 7, 2010, release. 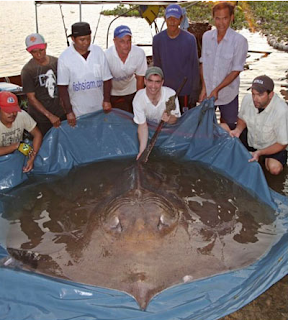 It was an angling moment which conjured memories of classic Jaws quote, ‘You’re going to need a bigger boat. That’s what British fishing enthusiast Ian Welch said when he caught this 350kg (771lb) giant stingray - with a rod. The fish took 90 minutes and 13 men to land.

‘It dragged me across the boat and would have pulled me in had my colleague not grabbed my trousers,’ said Mr Welch, who smashed the record for the largest rod-caught freshwater fish.

‘It buried itself on the bottom. I tried with every ounce of power but it just would not budge. After an hour, my legs went. Another 30 minutes went by and somehow I found the reserves to shift it.’

Mr Welch, 45, a freshwater biologist, was tagging stingrays in Thailand when he landed the fish and broke the 2005 record for a 293kg (646lb) catfish.
Posted by CDM at 3:20 AM No comments:

"Watchmen" clocked in with $55.7 million in ticket sales to claim the top spot at the box office, making director Zack Snyder's comic book adaptation about a team of twisted superheros the biggest opening of 2009 so far.

Dan Fellman, head of distribution for "Watchmen" studio Warner Bros., said it was unfair to compare the two films.

"They're two different movies," Fellman said Sunday. "This is a movie that runs two hours and 45 minutes. That really only leaves the exhibitor with one showing a night. If you have an 8 o'clock show, the next show is at midnight. So with essentially one show a night, I think this is outstanding."

Many "Watchmen" enthusiasts raced to IMAX theaters to see the exploits of Dr. Manhattan and company on the bigger screens. Greg Foster, chairman and president of IMAX Filmed Entertainment, said the movie sold out on all 124 IMAX screens it was playing on during the weekend and was the second largest opening in company history behind another superhero film, 2008's "The Dark Knight."

With no other new releases to compete against, "Watchmen" easily bumped off "Tyler Perry's Madea Goes to Jail," which had held the top spot the two previous weekends. The Lionsgate comedy took in $8.8 million, good for second place, according to studio estimates Sunday. 20th Century Fox's "Taken," starring Liam Neeson, took the No. 3 position with $7.5 million.